We are still seeing delays to some deliveries, please allow more time for your parcel to arrive

Photosynthetically Active Radiation (PAR)
PAR is the section of the spectral range of light between 400 – 700 nanometres which is needed by plants, corals, clams, anemones and nudibranchs for photosynthesis. This is found from actinic UVA to near-infrared. (Graph 1) 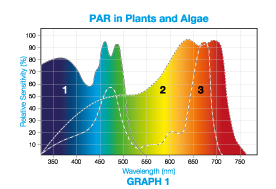 When it comes down to measuring the light energy and quality of lighting for your setup, PAR has recently become one of the most popular methods of doing so, however the term in my opinion is still overused due to the factors we will look at in regards to human perception and what we will look at later which is the PUR.
If you take a look at Graph 1 the UVA is between 400 – 550nm of which you will find the highest PAR values of the actinic range to lie between 420 and 485. Peridinin is a light-harvesting carotenoid associated with chlorophyll which mainly absorbs these wavelengths.
Near infrared (energy spikes in the red spectrum) is 620 –720nm which is the red absorption bandwidth of chlorophylls A and B. (Graph 2). (The two known most common types of chlorophyll). 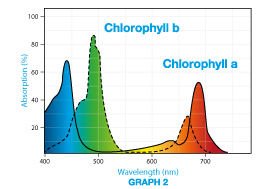 Photons at shorter wavelengths tend to get filtered out by the ozone layer and can cause damage to the cell tissue. This is why you don’t see aquarium lighting with a spectrum much lower than 400nm.
Green/yellow light occupies the middle spectrum. As mentioned in the opening paragraph, in general humans can see the light between 400nm – 700nm however it is between 550 – 620nm which is mostly visible to us (Graph 3).

Getting the best PAR for your setup
Actinic lighting or bulbs that emit mainly actinic light (420nm) will in general have a lower PAR however the PAR that it does have will contribute to the overall PAR of your lighting.
Bulbs that occupy between 550-620nm in the spectrum, being your yellow-green which are your common household fluorescents with low colour temperatures of around 2700k, will produce high PAR but very little useful light for photosynthesis. (PUR). The bulbs producing mainly infrared will produce more PAR light energy but to get the best useful PAR output the most suitable is a mixture of the UVA and near-infrared.
This is one of the main reasons you see such a different range of fluorescent tubes on the aquatics market which all have their own benefits to the lighting of your aquarium.
Tropical and marine species are very particular as to the spectrum of lighting they require, therefore specialist lighting is required in order to replicate that of natural sunlight.
Plants and corals require a balanced spectrum of light. Within the colour spectrum the photosynthetically active radiation (PAR) region is the part to which plants and light dependent corals will respond more effectively.
In Graph 2 you can see the two peaks. These show which aspects of the PAR spectrum are beneficial for photosynthesis (PUR) for chlorophylls A and B.
As you can see from the Graph 3 humans are more sensitive to the yellow-green region of the spectrum which is also the ideal range of 665nm- 680nm for the growth of Algae. Cyano bacteria can also grow at this range as well as 525nm-620nm, whereas plants and corals respond actively to the red light and blue light.
PAR in plants and algae:
There are 3 main sections of PAR to look at when looking at the overall growth and propagation of plants and algae.
1: Phototropic response
This is the chlorophyll containing plant or algae responding to a positive light source to begin the process of photosynthesis. Blue and UVA light regulate a wide range of responses in plants, including growth towards the light chloroplast migration stomatal opening (plant breathing) all of which are important for the initial growth of plants, zooxanthellae, etc.
2: Photosynthetic response
The process which begins when energy from light is absorbed by proteins called photosynthetic reaction centres that contain chlorophylls.
3: Chlorophyll synthesis
The chemical reaction which occurs at the correct wavelength of light that results in the formation of chlorophyll, thus resulting in continued growth of a plant, algae, zooxanthellae and the ability to feed and propagate.
This section is important in all aquarium lighting however is very often forgotten about as without this wavelength range (560 – 700nm) zooxanthellae and plants cannot properly feed and propagate, resulting in stunted freshwater plant growth and over time poor coral quality and health. 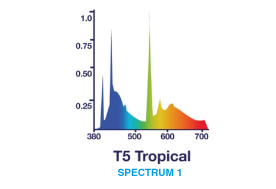 As you see from the above spectrum of the iQuatics Tropical Lamp, the PAR is made up of 3 main spikes which are all important when considering the lighting; however the most important is the red side of the spectrum which is one of the most common misjudgements made in the common marine setup. A lot of marine keepers assume that the blue end (uva/actinic) range of the spectrum is the most useful due to the fact that the blue part of the spectrum doesn’t get absorbed as easily by the salt content in your tank.
You will find that most daylight bulbs like the iQuatics 10000k and the lower 6500k will incorporate both the blue and red aspects of the spectrum, however with deeper tanks it is recommended that these tubes are supplemented by actinic or higher kelvin lights to provide the essential requirements for stony corals, clams and other sessile species that depend on the photosynthesis of zooanthellic algae which need light energy from 465 – 485nm. 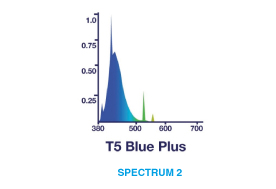 As you can see above (Spectrum 2) the iQuatics Blue Plus and actinic tubes are a good supplement for a standard daylight tube from the unique phosphor blend giving out a spectrum between the desired range of 420nm – 485nm.
In regards to tropical / freshwater planted setups, please note that actinic or blue lighting in excessive amounts is not recommended due to the fact that most green algae like zooanthellic require more of the spectrum 400 – 520nm to thrive and you could expect to see the growth of excessive green algae. This is why more commonly you see the blue tubes used in a marine setup where your corals depend more upon the growth of zooanthellic algae.
With the use of too much blue in a freshwater setup even on the deeper tanks, you will find that your plants will struggle to compete against nuisance algae such as hair algae. On another note, it is not ideal to use the blue tubes in a marine tank as the only source of lighting as the spectrum around 420nm and slightly lower has been proven to cause bleaching in your corals. It is better for you to have the blue tubes as a supplement light running alongside a daylight tube or equivalent thus helping to provide a full spectrum.
PUR
PUR (Photosynthetically Usable Radiation) is the measurement of how much of the PAR wavelengths are useful light absorbed by zooanthellae pigments thus stimulating the photosynthesis plants and corals etc.
There is no data (figures) to back up PAR results as it is based on theory but we do have a general ideal that to get the best PUR results your lighting would have wavelengths falling between 400 – 550nm and 620 –740nm. (Graph 2) shows the known absorption spectrum for the two most common chlorophyl types in aukaryotic organisms, chloryphyll A and chlorophyll B.
We cannot find the exact wavelengths that different corals use as they are very adaptive to light conditions. Given time they can adapt to use new algae that use wavelengths found within the PAR. Over many years the PUR could eventually be similar to the PAR. Due to this adaptation it is difficult to pinpoint which wavelengths you would be testing for. We will go into more detail about PUR at a later date.
“It’s all about the PAR! I’m afraid not!”
“The brighter the bulb the better”
If you take for instance the spectrum of the iQuatics Blue Plus tube (spectrum 2) and a sample of a 2500k spectrum of a household fluorescent tube (spectrum 3) the blue plus has less PAR than the fluorescent light commonly used in domestic use, however you will see that the PAR of the standard fluorescent is made up of the spectrum which is wasted energy and not required for photosynthesis, whereas the blue plus tube has almost all usable radiation. 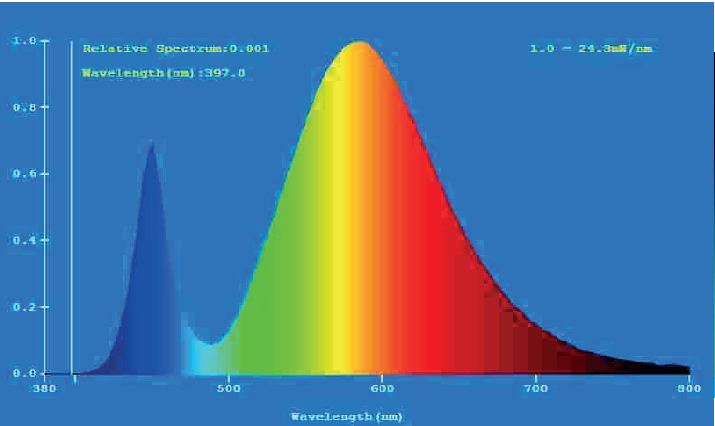